What Does FTR Mean?

FTR means "For The Record." The abbreviation FTR, with the meaning "For The Record," is typically used to indicate that what the speaker is about to say is important and should be remembered.

FTR is often used to indicate that the speaker may not agree with what they are about to say and wishes to distance themselves from it. However, it can also be used to emphasize the speaker's role in something that they wish to take credit for.

Of note: FTR has the same meaning as the abbreviation JFTR ("Just For The Record").

When I write FTR, I mean this: 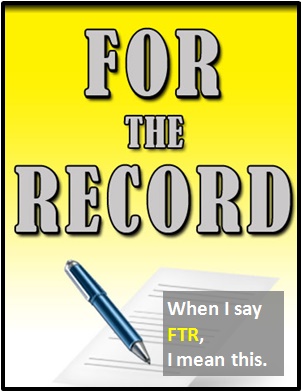 FTR usually indicates that the speaker wishes their remarks to be taken note of.

Examples of FTR in Sentences

Here are examples of FTR being used in conversations:

An Academic Look at FTR

The abbreviation FTR is a prepositional phrase (the preposition is for), which is used as an adverb to establish the setting for the main clause.

FTR is an initialism abbreviation. Technically, this means it is pronounced using its individual letters (i.e., Eff Tee Arr), but as this is harder to say than "For The Record," it is not often uttered using its letters. In other words, the abbreviation FTR is for efficiency in writing and not efficiency in speech.

Before the digital era, we would have just said "For The Record" instead of using the abbreviation FTR.

Example of FTR Used in a Text

FTR
Help Us To Improve Cyber Definitions
Please tell us using this form.