What Does FTM Mean?

The abbreviation "FTM" is most widely used with the meaning "Female-to-Male" to refer to a transgender person who is transitioning from being a woman to being a man. The transition may be social or physical (i.e., involving surgery and/or drugs).

FTM is the opposite of MTF (Male To female).

FTM also means "First-Time Mom." It is typically used in posts on parenting forums and in parenting related chats, to refer to a woman who is about to give birth to (or has recently given birth to) her first child. In this context, FTMs are usually the recipients of much support and love from the community, but can also be treated condescendingly.

"First-Time Mom" is another common definition for FTM, especially in parenting related forums and groups.

When I write FTM, I mean this: 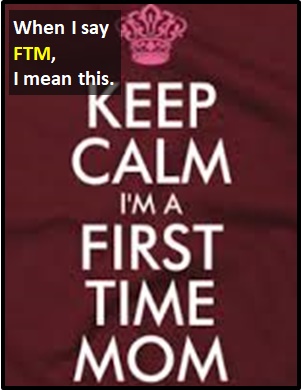 Examples of FTM in Sentences

Here's an example of FTM being used in conversation:

An Academic Look at FTM

Whether used with the meaning "Female-to-Male" or to mean "First-Time Mom," FTM is classified as an initialism abbreviation, as it is pronounced using its individual letters (i.e., "Eff Tee Emm"). Initialisms are different to acronyms, which are spoken like words.

Before the digital era, we might have said something like "new mum" instead of using FTM to mean "First-Time Mom."
-->

Example of FTM Used in a Text

FTM
Help Us To Improve Cyber Definitions
Please tell us using this form.