What Does EWW Mean?

EWW is an "Exclamation Of Disgust."

The word EWW (pronounced "Err" or "Ugh") is an interjection used as an exclamation of disgust. EWW is synonymous with the word "Gross."

EWW is sometimes typed as EW.

When I write EWW, I mean this: 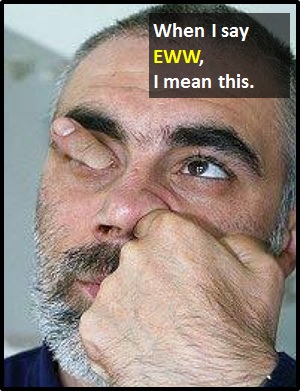 EWW is an interjection used to express disgust.

Examples of EWW in Sentences

Here are examples of EWW being used in conversations:

An Academic Look at EWW

EWW is an interjection. An interjection is not grammatically related to any other part of the sentence. It is included in a sentence (usually at the start) to express a sentiment such as surprise, disgust, joy, excitement, or enthusiasm. In formal writing, interjections are offset from the surrounding words with commas. For example: EWW is commonly seen without an exclamation mark (i.e., it can be written "EWW!" or "EWW").

As it imitates a sound that occurs naturally, EWW is an onomatopoeic word. It is similar to words such as "Achoo," "Ah," and "Mmm."

Example of EWW Used in a Text

EWW
Help Us To Improve Cyber Definitions
Please tell us using this form.

Ways to Say I Love You BARF (to vomit) BOOT (an inexperienced person, to vomit) CARPE (vomit, throw up) CHUNDER (to vomit) MINGING (horrible or disgusting) SKEEVE (disgusting or creepy) VOMIT (expression of disgust)