What Does ELI5 Mean?

ELI5 is a request to explain something in simple terms, such as a 5-year old could understand. It indicates that the sender has not grasped what was being said.

ELI5 can be used self-deprecatingly, but it is often used sarcastically, especially when someone is trying to make an excuse for something that they have done (or failed to do), or when a plan or idea is unnecessarily complicated. For example:

(Here, ELI5 represents a genuine request for a clear and simple explanation.)

(This example is taken from the entry for obfuscation fallacy on our sister site How To Get Your Own Way.)

The number 5 in ELI5 (meaning "5 years old") can be replaced with any number. Five is used most often, because it implies that the sender understands basic English, but is unable to grasp complicated concepts.

When I write ELI5, I mean this: 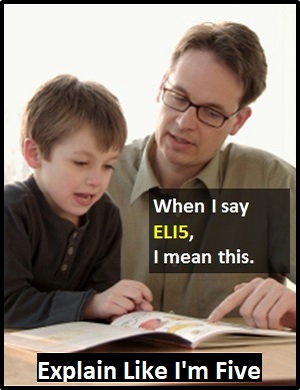 ELI5 is a request for a simple explanation.

An Academic Look at ELI5

ELI5 is typically used as a standalone imperative sentence (i.e., an order or request). It is not often used as a part of speech within a wider sentence.

ELI5 is an acronym (i.e., an abbreviation spoken like a word). It is pronounced "elly-five."

Acronyms differ from initialism abbreviations, which are pronounced using their individual letters.

Example of ELI5 Used in a Text