What Does DHS Mean?

DHS means "Department of Homeland Security." The United States Department of Homeland Security is a cabinet department of the United States federal government with responsibilities in public security. It was created by the Bush Administration in 2002/3 and is reputed to have over 240,000 employees making it one of the largest cabinet departments in the United States. It is often criticized for being one of the most costly and poorly organized reorganisations in US history. Its critics accuse it of wasting billions of dollars on needless projects designed only to reward those close to the president.

Of note, the DHS should be confused with the UK's DHSS (Department of Health and Social Security), which has recently been renamed as the Department of Work and Pensions.

When I write DHS, I mean this: 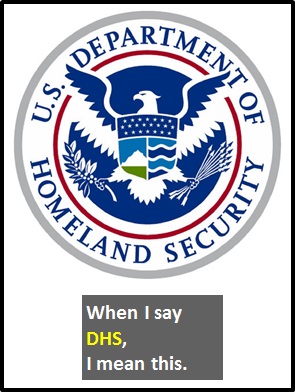 The Department of Homeland Security (DHS) is a cabinet department of the United States federal government.

Examples of DHS in Sentences

Here are examples of DHS being used in conversations:

An Academic Look at DHS

As it is pronounced using its individual letters (i.e., "Dee Aitch Ess"), DHS is classified as an initialism abbreviation. Initialisms are different to acronyms, which are spoken like words.

Example of DHS Used in a Text

DHS
Help Us To Improve Cyber Definitions
Please tell us using this form.