DFLI means "Don't Feel Like It." The abbreviation DFLI is an informal way of saying you are not interested in doing something or going somewhere, simply because you're not in the mood or can't be bothered. It can sometimes be regarded as a sulky or lethargic response.

When I write DFLI, I mean this: 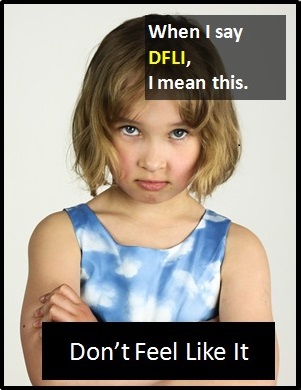 Examples of DFLI in Sentences

Here are examples of DFLI being used in conversations:

An Academic Look at DFLI

DFLI is an initialism abbreviation. This means it is pronounced using its individual letters (i.e., Dee Eff Ell Aye), but as this is harder to say than "Don't feel like it" it is not often spoken using its letters. In other words, the abbreviation DFLI is for efficiency in writing and not efficiency in speech.

The verb "to feel" is used to describe someone's physical or mental state. If you feel like doing something, you want to do it.

Example of DFLI Used in a Text

DFLI
Help Us To Improve Cyber Definitions
Please tell us using this form.