What Does DAYUM Mean?

DAYUM is a comical representation of how the word "Damn" sounds when spoken with an accent from the southern United States. It is widely used to express (usually mock) anger, frustration or admiration, or to provide emphasis.

In 2012, The Gregory Brothers and Daym Drops had a viral hit with a song entitled Oh My Dayum:

When I write DAYUM, I mean this: 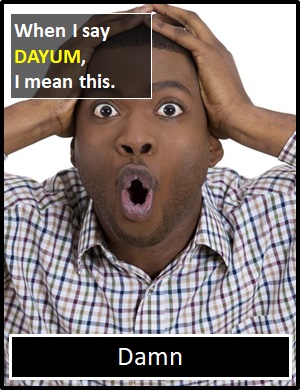 Examples of DAYUM in Sentences

Here are examples of DAYUM being used in conversations:

An Academic Look at DAYUM

DAYUM is an exclamation or interjection. Interjections are not grammatically related to any other part of the sentence. They are included in a sentence (usually at the start) to express a sentiment such as surprise, disgust, joy, frustration, excitement, or enthusiasm. In formal writing, interjections are often offset from the surrounding or following words with commas. For example:


(Here, DAYUM is an interjection expressing surprise or admiration.)

DAYUM is also used as an adjective (i.e., a describing word). For example:

Example of DAYUM Used in a Text