What Does COKE Mean?

COKE means "Cocaine." COKE is one of the many slang terms for cocaine. It is arguably the most popular slang term for the highly addictive narcotic. COKE typically describes the powdered version of the drug. Other forms (like crack cocaine, freebase cocaine ect,) have their own terms.

There are so many nickname and slang terms for cocaine that it would be nearly impossible to list them all. Many names vary by country or region.

Here are some of the other well-known slang terms for COKE: Of note, a slang term for any drug is often called a "street name." These terms are created to confuse, divert and otherwise dodge the suspicions of law enforcement, parents, and teachers.

When I write COKE, I mean this: 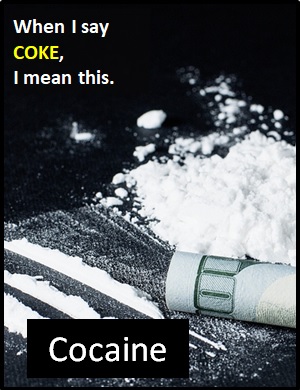 [COKE is the most popular slang term for Cocaine.]

Examples of COKE in Sentences

Here are examples of COKE being used in conversations:

An Academic Look at COKE

COKE is typically used as a noun (i.e., a naming word). For example:

(Here, COKE is being used as a noun.)

Example of COKE Used in a Text

COKE
Help Us To Improve Cyber Definitions
Please tell us using this form.