What Does BWL Mean?

BWL means "Burst With Laughter." BWL is similar to LOL, but it is used when something is extremely funny (i.e., so funny, it feels as though you might burst with laughter).

When I write BWL, I mean this: 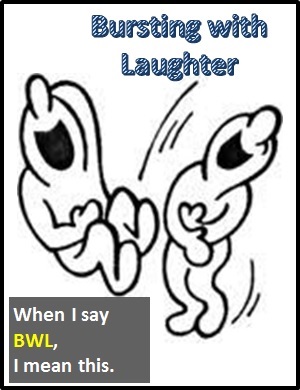 BWL is similar to LMAO.

Examples of BWL in Sentences

Here is an example of BWL being used in a conversation:

An Academic Look at BWL

BWL is often used as an interjection. (An interjection is not grammatically related to any other part of the sentence. It is included in a sentence to express a sentiment such as surprise, disgust, joy, excitement, or enthusiasm.)

BWL is an initialism abbreviation. Technically, this means it is pronounced using its individual letters (i.e., Bee Dublyu Ell ), but as this is harder to say than "Bursting with Laughter," it is not often uttered using its letters. In other words, the abbreviation BWL is for efficiency in writing.

Before the digital era, we might have said something like "my sides are splitting" instead of BWL.

Example of BWL Used in a Text

BWL
Help Us To Improve Cyber Definitions
Please tell us using this form.