What Does BTN Mean?

BTN means "Better Than Nothing." The abbreviation BTN means that having something unsatisfactory is better than having nothing at all. For example, you might want a steak, but a burger will do, i.e., it is better than nothing.

Of note, BTN is sometimes used as a contracted way of saying "between" and can also stand for "Behind The News."

When I write BTN, I mean this: 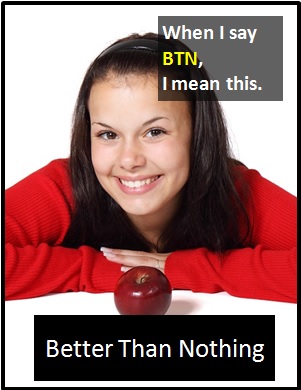 BTN usually means "Better Than Nothing."

Examples of BTN in Sentences

Here are examples of BTN being used in conversations:

An Academic Look at BTN

The phrase BTN is classed as an idiom i.e., a word or phrase that is not taken literally.

As it is pronounced using its individual letters (i.e., "Bee Tee En"), BTN is classified as an initialism abbreviation. Initialisms are different to acronyms, which are spoken like words.

BTN is typically used like an adjective (i.e., a describing word). For example:

Before the digital era, we would have said something like "it will do" or "it could have been better" instead of BTN.

Example of BTN Used in a Text

BTN
Help Us To Improve Cyber Definitions
Please tell us using this form.