What Does BMT Mean?

BMT means "Big Man Ting." It is also the name of a Subway Sandwich and means "Biting My Tongue," "Before My Time," and "Basic Military Training." Here is a little more information about each of these definitions of BMT.

BMT is used in text-based chat and online to mean "Big Man Ting." This is a phrase originally from Jamaican patois (meaning "Big Man Thing"), which typically indicates that something is for adults or particularly cool people only.

The use of BMT usually implies that the sender consider themself to be superior to the recipient. However, "Big Man Ting" is also used as an interjection, to add emphasis to a statement, similar to terms such as "For sure" and "Definitely."

BMT is the name given to an Italian-themed sandwich from the fast food chain Subway. The BMT, which contains ham, pepperoni and salami, is one of Subway's most popular sandwiches. Subway advertises BMT as meaning "Big, Meaty, Tasty." However, according to some sources, the initials BMT actually mean "Broadway Manhattan Transit" and originated when Subway sandwiches were named after subway lines in New York city.

BMT is also used with the meaning "Biting My Tongue" to indicate that the sender is resisting the urge to say something that might upset the recipient or be controversial.

BMT can also be used to mean "Before My Time." In this context, it indicates that something occurred before the sender was born or was around.

In military circles, BMT is used with the definition "Basic Military Training" to refer to the initial phase of training for recruits entering military service.

BMT is also the name of a Subway Sandwich.

"Biting My Tongue" is another definition for BMT.

BMT also means "Before My Time."

When I write BMT, I mean this: 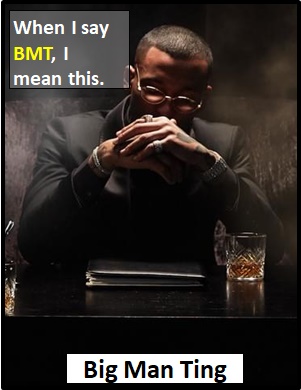 BMT is also the name of a Subway Sandwich and means "Biting My Tongue," "Before My Time," and "Basic Military Training."

Examples of BMT in Sentences

Here are examples of BMT being used in conversations:


(Here, BMT means both "Before My Time" and "Biting My Tongue.")

An Academic Look at BMT

As it is pronounced using its individual letters (i.e., "Bee Emm Tee"), BMT is classified as an initialism abbreviation. Initialisms are different to acronyms, which are spoken like words.

When used with the meaning "Big Man Ting," BMT is an abbreviation of a slang phrase. Slang refers to words, phrases and uses of language that are regarded as very informal and which are often restricted to a special context or a particular group of users.

Example of BMT Used in a Text

BMT
Help Us To Improve Cyber Definitions
Please tell us using this form.