What Does BESITOS Mean?

BESITOS is a diminutive of the Spanish word "Besos," meaning kisses. It is often used at the end of a message in much the same way that English-speaking people might sign off a message with "x" (or multiples thereof) to indicate kisses.

As with "x" in English, the use of BESITOS is typically restricted to messages between girls, people of the opposite sex or family members. (It would not be appropriate to sign off a message to your boss or bank manager with BESITOS!) However, BESITOS is used much more widely than might be expected by English-speaking people, who might normally save their kisses for close friends and family members.

When I write BESITOS, I mean this: 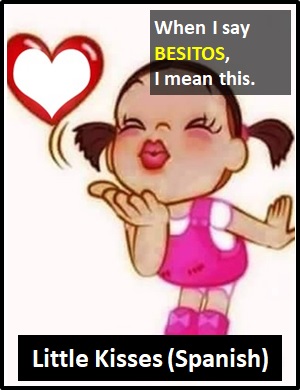 BESITOS is a diminutive of the Spanish Word "Besos."

Examples of BESITOS in Sentences

Here are examples of BESITOS being used in conversations:

An Academic Look at BESITOS

BESITOS is a Spanish word. It is a diminutive of the word "Besos," which has been modified to convey a sense of intimacy or endearment. Diminutives are suffixes that indicate small size, youth, affection or even contempt.

Before the digital era, we might have just said or written something like "Besos" or "x" instead of using BESITOS.

Example of BESITOS Used in a Text

BESITOS
Help Us To Improve Cyber Definitions
Please tell us using this form.