AYSOS (Are You Stupid or Something?) is typically used as a response to an obvious question or idiotic statement.

When I write AYSOS, I mean this: 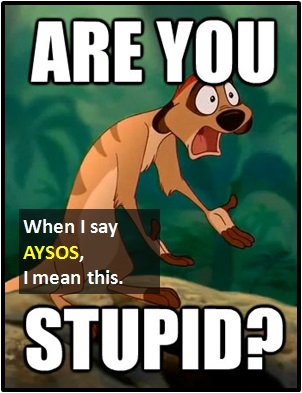 The image shows an expression of disbelief caused by the stupidity of another.

Examples of AYSOS in Sentences

Here are some examples of AYSOS being used in sentences:

An Academic Look at AYSOS

AYSOS is an initialism abbreviation. Technically, this means it is pronounced using its individual letters (i.e., Ay, Why, Ess, Oh, Ess), but as this is harder to say than "Are you stupid or something," it is not often uttered using its letters. In other words, the abbreviation AYSOS is for efficiency in writing and not efficiency in speech. Of note, as AYSOS is becoming more popular, it is being spoken like a word. In other words, it appears to be transforming into an acronym.

AYSOS plays the role of an interrogative sentence (i.e., a question), but it is commonly seen without a question mark. In other words, it can be written "AYSOS?" or "AYSOS".

Example of AYSOS Used in a Text

AYSOS
Help Us To Improve Cyber Definitions
Please tell us using this form.