The abbreviation ATFQ is used with the meaning "Answer The F*cking Question" as a demand for a straight answer. The use of ATFQ is extremely impolite. It is typically used when the sender is angry at repeated prevarication on the part of the other person.

ATFQ is often spoken as "Answer The Freakin' Question," when the use of swear words might be considered inappropriate, or when the speaker wishes to inject some levity into the situation.

When I write ATFQ, I mean this: 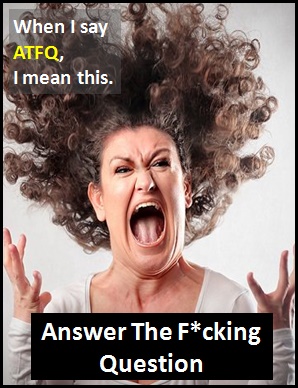 Examples of ATFQ in Sentences

Here are examples of ATFQ being used in conversations:

An Academic Look at ATFQ

ATFQ is typically used as an imperative (i.e., an order), with the meaning "Answer The F*cking Question" or "Answer The Freakin' Question." In text-based conversations, the abbreviation is commonly seen without an exclamation mark. In other words, it can be written ATFQ! or just ATFQ.

As it is pronounced using its individual letters (i.e., "Ay Tee Eff Kew"), ATFQ is classified as an initialism abbreviation. Initialisms are different to acronyms, which are spoken like words.

Before the digital era, we would have just said "Answer The F*cking Question" or "Answer The Freakin' Question," or something like "Tell Me For F*ck's Sake!" instead of using ATFQ.

Example of ATFQ Used in a Text

ATFQ
Help Us To Improve Cyber Definitions
Please tell us using this form.