ABRAPALABRA means "The Ability To Speak Spanish When Drunk." The term ABRAPALABRA refers to the increased confidence a person feels when they try to speak a language when intoxicated. It is a play on the words "abracadabra" (the "magic word") and "palabra" (which means "word" in Spanish).

Although ABRAPALABRA most commonly describes the increased confidence felt by a someone attempting to speak Spanish when drunk, it may also be applied to any other language.

When I write ABRAPALABRA, I mean this: 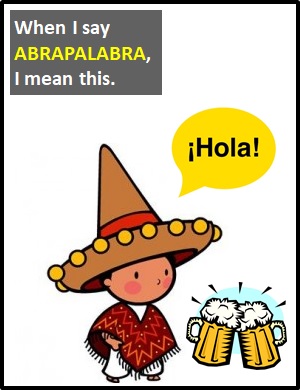 ABRAPALABRA! After a couple of cervezas, my ability to speak Spanish improves dramatically.

Examples of ABRAPALABRA in Sentences

Here are examples of ABRAPALABRA being used in conversations:

An Academic Look at ABRAPALABRA

ABRAPALABRA is typically used as a noun (i.e., a naming word). For example:

(Here, ABRAPALABRA is being used as a noun.)

Example of ABRAPALABRA Used in a Text

ABRAPALABRA
Help Us To Improve Cyber Definitions
Please tell us using this form.