What Does AAP Mean?

AAP means "Always a Pleasure." The abbreviation AAP is used in text-based conversations with the meaning "Always a Pleasure," as in "You're welcome" or "Don't mention it." In this context, AAP is typically used as a way of responding to a message of thanks.

Of note, AAP can also mean "Affirmative Action program," which refers to policies, practices, and procedures that an employer implements to ensure that all job applicants and employees receive equal opportunities for recruitment, selection and advancement.

When I write AAP, I mean this: 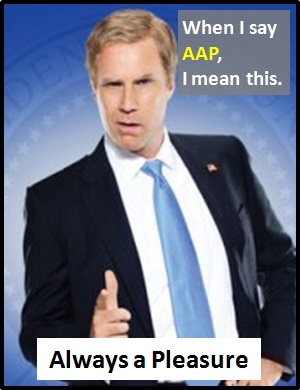 AAP usually means the same as "Don't mention it."

Examples of AAP in Sentences

Here are examples of AAP being used in conversations:

An Academic Look at AAP

As it is pronounced using its individual letters (i.e., "Ay Ay Pee"), AAP is classified as an initialism abbreviation. Initialisms are different to acronyms, which are spoken like words.

AAP is typically used as a standalone declarative sentence (i.e., a statement). In other words, it is not used as another part of speech within a wider sentence.

Before the digital era, we might have said something like "You're welcome" or "Don't mention it" instead of using the abbreviation AAP.

Example of AAP Used in a Text

AAP
Help Us To Improve Cyber Definitions
Please tell us using this form.