ZEECH means "Loser" and is also a "Snowboarding Term."

When used with the meaning "Loser," ZEECH is an insult which implies that a person is unsuccessful and unpopular. In this context it has negative connotations, but is not directly related to the term ZEECHED (Stoned on Xanax).

ZEECH is also a term used in snowboarding. It is a negative term used to describe when a boarder attempts to get perpendicular on a rail, but only gets to an angle of around 45 degrees.

ZEECH is also a "Snowboarding Term":

When I write ZEECH, I mean this: 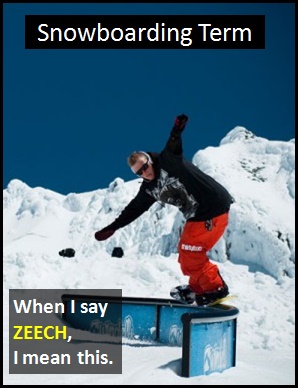 ZEECH has negative connotations, whether or not it is used in snowboarding.

Examples of ZEECH in Sentences

Here are examples of ZEECH being used in conversations:

(Here, ZEECH is a "Snowboarding Term.")

An Academic Look at ZEECH

When used with the meaning "Loser," ZEECH is a noun (i.e., a naming word). However, when used as a "Snowboarding Term," ZEECH is a verb (i.e., a doing word). For example:

Before the digital era, we might have said something like "Waster" or "Dork" instead of using ZEECH to mean "Loser."

Example of ZEECH Used in a Text

ZEECH
Help Us To Improve Cyber Definitions
Please tell us using this form.