What Does YODO Mean?

You Only Die Once

When used with the meaning "You Only Die Once," the abbreviation YODO is an antonym of (i.e., it has the opposite meaning to) the phrase YOLO (You Only Live Once). In contrast to YOLO, YODO is used to describe a cautious approach to making life choices.

It is commonly believed that the term YODO was invented to criticize the type of reckless and dangerous behavior typically posted online with the hashtag #YOLO. Subsequently, #YODO has become a popular way to mock those who overuse #YOLO on social media.

You Only Dump Once

When used with the meaning "You Only Dump Once," YODO means that you should never get back with someone that you have jilted.

YODO means "You Only Die Once." This is the most common definition for YODO on Snapchat, WhatsApp, Facebook, and Twitter.

YODO also means "You Only Dump Once."

When I write YODO, I mean this: 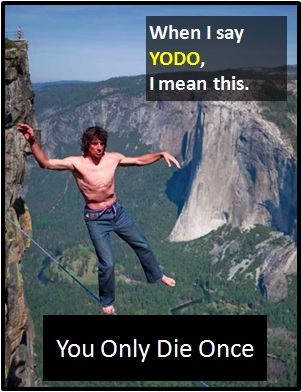 YODO also means "You Only Dump Once."

Examples of YODO in Sentences

Here are examples of YODO being used in conversations:

(Here, YODO means "You Only Dump Once.")

An Academic Look at YODO

YODO is an acronym (i.e., an abbreviation spoken like a word). Acronyms differ from initialism abbreviations, which are pronounced using their individual letters.

YODO is typically used as a standalone declarative sentence (i.e., a statement). It is not often used as another part of speech within a wider sentence.

Before the digital era, we might have said something like "Don't be stupid" instead of using YODO with the meaning "You Only Die Once."

Example of YODO Used in a Text