What Does X_X Mean?

X_X is an icon showing a dead person's face. An X or + has long been used in cartoons for the eyes of dead people. (See also +_+.)

When used online, X_X does not usually mean "dead" however. It usually means something like "I wish I were dead," "I'm so embarrassed," or "I'm gutted."

X_X means "Dead," but it is also used to mean "embarrassed" or "gutted." This is the most common definition for X_X on Snapchat, WhatsApp, Facebook, Instagram, TikTok, and Twitter.

When I write X_X, I mean this: 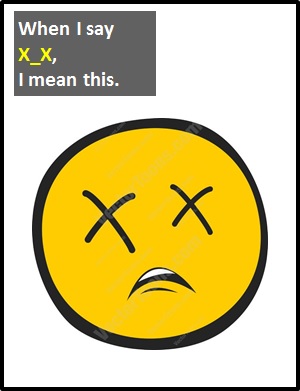 X and + have long been used for the eyes of dead people in cartoons.

Examples of X_X in Sentences

Here are examples of X_X being used in conversations:

An Academic Look at X_X

X_X is classified as an icon. In other words, it is a symbol that represents something.

Before the digital era, we might have said something like "I wish a hole would swallow me up" or "kill me now" instead of X_X.

Example of X_X Used in a Text

X_X
Help Us To Improve Cyber Definitions
Please tell us using this form.