What Does UNALIVE Mean?

UNALIVE means "To Commit Suicide." The term, although morbid, became a way for users on TikTok to freely discuss and remove the stigmas relating to suicide. TikTok generally removes videos and content that refer to death, dying, or suicide, so users instead use the verb “to unalive”. It is typically used in a more light-hearted context. Videos part of the #unalive hashtag usually range from: mental health discussions, uplifting advice, depressed people, or overly dramatic people (making a joke about a small inconvenience).

Here is an example of a TikTok that uses the #unalive hashtag:

When I write UNALIVE, I mean this: 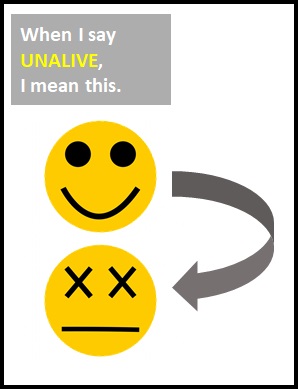 [To unalive means to kill yourself.]

Examples of UNALIVE in Sentences

Here are examples of UNALIVE being used in conversations:

An Academic Look at UNALIVE

Unalive is typically used as a verb (i.e. a doing word). For example:

(Here, unalive is being used as a verb.)

Example of UNALIVE Used in a Text

UNALIVE
Help Us To Improve Cyber Definitions
Please tell us using this form.