What Does UFG Mean?

UFG most commonly means "Up for grabs." UFG describes something that is attainable by anyone who wants to compete, to buy, to win or to own it. (It often refers to objects (often newly available things), but it can refer to people as well).

UFG often suggests a problematical situation. For example, if the leader of a country was suddenly deposed, a political commentator might say the leadership is "up for grabs."

The phrase "up for grabs" was popularized during the mid-1940s as part of the jive talk culture (a form of slang popular in Harlem, USA.)

When I write UFG, I mean this: 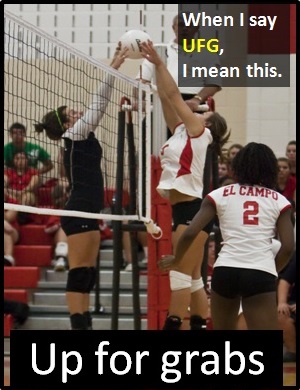 UFG means "up for grabs."

Examples of UFG in Sentences

Here are examples of UFG being used in conversations:

An Academic Look at UFG

UFG is an initialism abbreviation. Technically, this means it is pronounced using its individual letters (i.e., Yu Eff Gee), but as this is harder to say than "Up for grabs," it is not often uttered using its letters. In other words, the abbreviation UFG is for efficiency in writing and not efficiency in speech.

The phrase "up for grabs" is an idiom. An idiom is a group of words that have become established by usage. Another example of an idiom is "over the moon" (meaning happy).

(Here, UFG is being used as a predicate adjective.)

Before the digital era, we might have said something like "it is available to anyone" instead of UFG.

Example of UFG Used in a Text

UFG
Help Us To Improve Cyber Definitions
Please tell us using this form.