What Does UEFA Mean?

UEFA (Union of European Football Associations) is the administrative body for association football in Europe, although several member nations have territory which is partially or entirely in Africa or Asia (e.g., Turkey and Kazakhstan). UEFA consists of 54 national association members and is one of six continental confederations of world football's governing body FIFA.

Until 1959, the main headquarters were located in Paris, and later in Bern. In 1995, UEFA headquarters moved to Nyon in Switzerland. Henri Delaunay was the first general secretary and Ebbe Schwartz the first president.

When I write UEFA, I mean this: 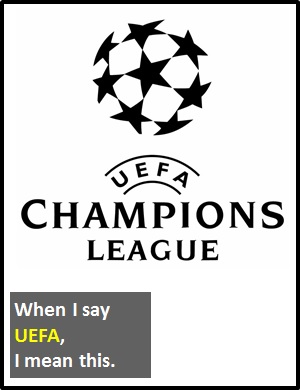 The image shows the official logo for the UEFA Champions League.

Examples of UEFA in Sentences

Here is an example of UEFA being used in a conversation:

An Academic Look at UEFA

UEFA is an acronym (i.e., an abbreviation spoken like a word). Acronyms differ from initialism abbreviations, which are pronounced using their individual letters.

Example of UEFA Used in a Text

UEFA
Help Us To Improve Cyber Definitions
Please tell us using this form.