The abbreviation TOTMTIME is used with the meaning "Time Of The Month Time" to refer to PMS (Premenstrual Syndrome); i.e., the physical and emotional symptoms that occur in the one to two weeks before a woman's period.

There are a number of shorter versions of TOTMTIME: These terms are often used to dismiss or complain about a woman's actions. All of them can be considered misogynistic and their use should generally be avoided by men.

When I write TOTMTIME, I mean this: 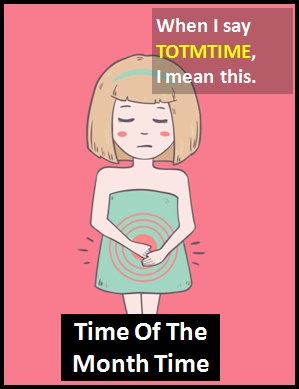 Examples of TOTMTIME in Sentences

Here are examples of TOTMTIME being used in conversations:

An Academic Look at TOTMTIME

TOTMTIME is a compound noun, made up of the initialism "TOTM" and the word "TIME".

Before the digital era, we might have just said "Time Of The Month Time" instead of using TOTMTIME.

Example of TOTMTIME Used in a Text