TINSTAFL means "There Is No Such Thing As Free Lunch."

The abbreviation TINSTAFL is used with the meaning "There Is No Such Thing As Free Lunch," which is a popular adage that holds that it is impossible to get something for nothing (which is the core tenet of all economics).

When I write TINSTAFL, I mean this: 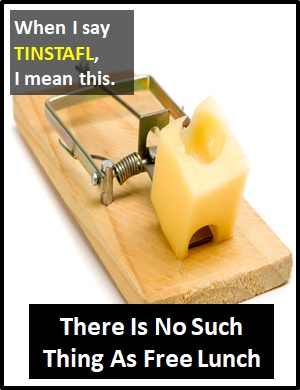 Examples of TINSTAFL in Sentences

Here are examples of TINSTAFL being used in conversations:

An Academic Look at TINSTAFL

TINSTAFL is typically used as a standalone declarative sentence (i.e., a statement). It is not normally used as another part of speech within a wider sentence.

Before the digital era, we would have just said "There Is No Such Thing As Free Lunch" instead of using the abbreviation TINSTAFL.

Example of TINSTAFL Used in a Text