What Does TGIO Mean?

TGIO means "Thank God It's Over! or Thank Goodness It's Over!".

Thank God It's Over!

The abbreviation TGIO is used with the meaning "Thank God It's Over!" to express relief that something has ended.

Thank Goodness It's Over!

TGIO is also used with the meaning "Thank Goodness It's Over," by those who prefer not to use the word "God" as an exclamation.

Of interest, in 2017, the American rock band "Stone Sour," released an album entitled "Hydrograd," featuring a track entitled "Thank God It's Over."

When I write TGIO, I mean this: 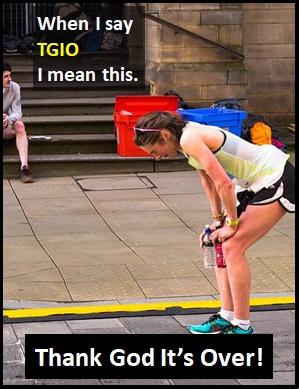 Examples of TGIO in Sentences

Here are examples of TGIO being used in conversations:

An Academic Look at TGIO

TGIO is typically used as a standalone declarative sentence. It is not normally used as another part of speech within a wider sentence.

TGIO is an initialism abbreviation. This means it is pronounced using its individual letters (i.e., Tee Gee Eye Oh). However, it is not often spoken using its letters. In other words, the abbreviation TGIO is for efficiency in writing and not efficiency in speech.

Before the digital era, we might have just said "Thank God It's Over" instead of using TGIO.

Example of TGIO Used in a Text