What Does REKT Mean?

The term REKT is used with the meaning "Financially Ruined" to refer to an investor in a cryptocurrency who has lost everything because of a drop in the value of their cryptocurrency holdings.

REKT is a simple misspelling of the word “wrecked”.

When I write REKT, I mean this: 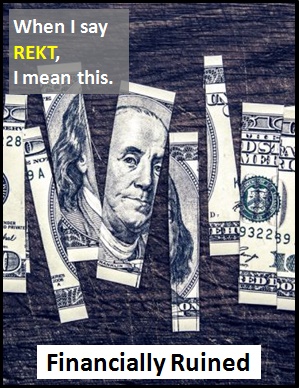 Examples of REKT in Sentences

Here are examples of REKT being used in conversations:

An Academic Look at REKT

When used with the meaning "Financially Ruined," REKT is a written contraction of the word wrecked, which is an adjective (i.e., a describing word).

Before the digital era, we might have just said "Wrecked," or something like "Ruined" or "Bust," instead of using REKT to mean "Financially Ruined."

Example of REKT Used in a Text