PLI means "Potential Love Interest". A PLI is a person whom you are attracted to and whom you see as having the potential for a romantic relationship. A PLI will be someone who has qualities that you consider important in a relationship, such as charm or intelligence. A person you "fancy" or "have a crush on" may be considered a PLI.

Of note, in the classic novel "Emma" by Jane Austen, the protagonist meets many "Potential Love Interests" and tries to act as a matchmaker for other characters in the story.

When I write PLI, I mean this: 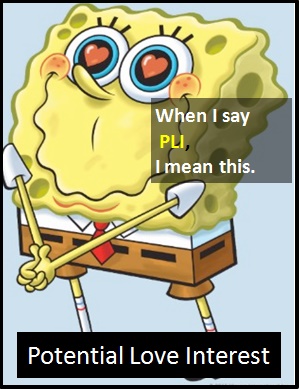 PLI. For every Bob there's a Betty.

Examples of PLI in Sentences

Here are examples of PLI being used in conversations:

An Academic Look at PLI

As it is pronounced using its individual letters (i.e., "Pee Ell Eye"), PLI is classified as an initialism abbreviation. Initialisms are different to acronyms, which are spoken like words.

Before the digital era, we might have said something like "A Potential Match" or even just "Potential Love Interest" instead of using PLI.

Example of PLI Used in a Text