What Does PIED Mean?

PIED is an abbreviation which means "Porn-Induced Erectile Dysfunction." It is also a slang term used with the meaning "Ignored or Rejected." Here is more information about each of these definitions of PIED, together with examples of use.

The abbreviation PIED is used with the meaning "Porn-Induced Erectile Dysfunction" to refer to a possible medical condition which prevents some males from achieving or maintaining a full erection during sexual activity (i.e., suffering Erectile Dysfunction (ED), due to an addiction to watching pornography.

PIED is a controversial theory for explaining sexual problems, as many studies suggest that pornography might actually help with ED.

PIED is also a slang term used with the meaning "Ignored" or "Rejected." It describes the act of purposefully ignoring someone when they make contact, whether by text, online, or in person. PIED is not synonymous with avoiding someone. In order to PIE someone or to be PIED, contact needs to be made.

Although PIED is commonly used when talking about a love interest, you can also be PIED by a friend, a family member, a social group or sports team. For example: PIED has become very popular since it was used on TV dating shows, such as Love Island.

The origins of the term PIED in this context aren't clear. It has been suggested that it comes from the use of PIED to refer to "Porn-Induced Erectile Dysfunction," as the term may have morphed into a very generalized and irrelevant meaning of rejection to someone's advances, or a rejection of their ideas or even their very existence.

Other suggestions include the possibility of PIED being related to having a cream pie shoved into your face, as in this image:

When I write PIED, I mean this: 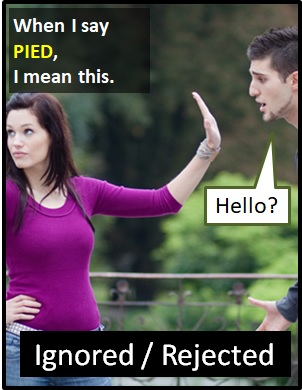 An Academic Look at PIED

When used with the meaning "Porn-Induced Erectile Dysfunction," PIED is an initialism abbreviation, as it is pronounced using its individual letters (i.e., "Pee Eye Ee Dee"). Initialisms are different to acronyms, which are spoken like words.

When used to mean "Ignored or Rejected," PIED is a slang word. Slang refers to words, phrases and uses of language that are regarded as very informal and which are often restricted to a special context or a particular group of users.

As a slang word, PIED is typically used as a verb (i.e. a doing word). The present tense verb "to pie" means to "to ignore" or "to reject." It is more commonly seen in its simple past form "PIED". For example:

Before PIED came into common usage as a slang word, we would have just said "ignored" or "rejected."

Example of PIED Used in a Text