What Does OOP Mean?

Here is some more information about each meaning:

OOP is routinely used on online selling sites, such as eBay, to mean "Out Of Print." In this context, it indicates that the item (usually a book or a record) is no longer being manufactured and suggests there is only a limited number available.

Most commonly used programming languages (e.g., Java, C++, C#, Python, PHP, JavaScript, Ruby) use "Object-Oriented Programming." These languages all use "objects," which can access or modify associated objects or data fields. In other words, there is routine interaction between objects to provide the program logic.

OOP can also mean "Out Of Place." In this context, it is similar to AWKS (Awkward).

When used to mean "D'oh!" OOP is an interjection, typically uttered on realization that someone (usually the speaker or sender) has made a mistake. (OOP is not a word you want to hear from your tandem skydiving instructor, surgeon or pilot!)

"Out of Print" is the most common definition for OOP, especially when used on eBay or other selling sites.

"Object-Oriented Programming" is a common definition for OOP, in computing circles.

"Out Of Place" is another common definition for OOP.

Forth Definition of OOP

"D'oh!" is another common definition for OOP.

When I write OOP, I mean this: 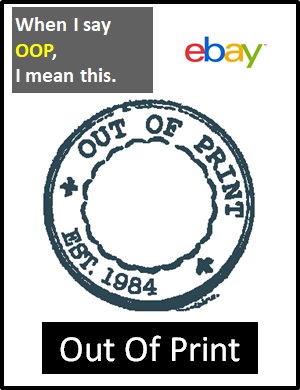 Examples of OOP in Sentences

Here are examples of OOP being used in conversations:

An Academic Look at OOP

When used an abbreviation, OOP is usually pronounced "Oh-Oh-Pee," making it an initialism.

When used to mean "D'Oh!", OOP is classified as an interjection (i.e., an expression of emotion). In this context, OOP is often pronounced "Oops" (with a letter "S" on the end).

Example of OOP Used in a Text

OOP
Help Us To Improve Cyber Definitions
Please tell us using this form.