What Does OMS Mean?

The abbreviation OMS is typically used online with the meaning "Oh My Science!" In this context, OMS is an interjection used as an alternative to expressions such as OMG ("Oh My God!") and OMGA ("Oh My Giddy Aunt!").

"Oh My Science" is the name of a networking website for scientists (www.oh-my.science.com).

The phrase "Oh My Science!" is widely used humorously in atheist circles. It's use was popularized in the animated TV series South Park:

OMS is also the initials of the "World Health Organization" (WHO in English) in a number of languages, including:

When I write OMS, I mean this: 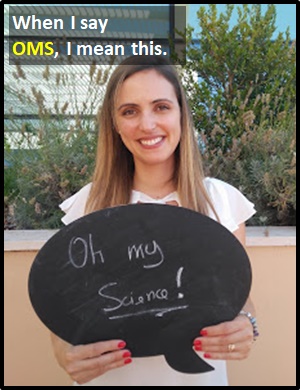 "World Health Organization" is another definition for OMS in a number of foreign languages.

Examples of OMS in Sentences

Here are examples of OMS being used in sentences, with the meaning "Oh My Science!":

An Academic Look at OMS

OMS is typically used an interjection. An interjection is included in a sentence to express a sentiment such as surprise, irritation, disgust, joy, excitement, or enthusiasm. They can be standalone or as part of a sentence (usually at the start). An interjection can end in an exclamation mark, but they are routinely omitted in text-based conversations.

As it is pronounced using its individual letters (i.e., "Oh Emm Ess"), OMS is classified as an initialism abbreviation. Initialisms are different to acronyms, which are spoken like words.

The use of OMS to mean "Oh My Science! pre-dates the digital era.

Example of OMS Used in a Text