What Does OHKO Mean?

In gaming, a move can be described as an OHKO if it totally depletes an enemy's power (or kills the enemy) with one shot (e.g., a spell, move or punch). OHKO is mostly commonly used in fighting games (i.e., hand-to-hand combat), but it can also apply to other types of games.

If you apply an OHKO, you can be said to have 'one shot' your opponent.

"One Hit Knock Out" is the most common definition for OHKO on gaming apps, such as Discord, Telegram and TeamSpeak, as well as on Snapchat, WhatsApp, Facebook, Twitter, and Instagram.

When I write OHKO, I mean this: 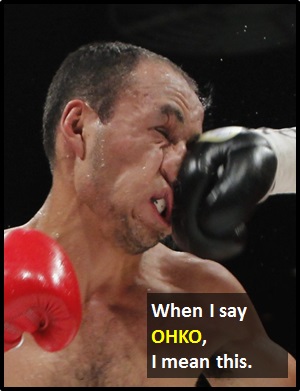 The image shows a boxer on the receiving end of a knock-out hit.

Examples of OHKO in Sentences

Here is an example of OHKO being used in conversation:

Example of OHKO Used in a Text

OHKO
Help Us To Improve Cyber Definitions
Please tell us using this form.