What Does LURVE Mean?

LURVE means "Love." LURVE is a non-standard spelling of the word "love." It is a humorous mispronunciation, the origin of which is widely credited to the 1977 Woody Allen film "Annie Hall," in which Allen's character avoids using the word "love" and retreats into comedy to avoid saying it:

Nowadays, LURVE may suggest more or less passion than "ordinary" love, depending on the context. It can also be used sarcastically to indicate strong dislike. For example: LURVE can also be written as LURV and LERVE.

When I write LURVE, I mean this: 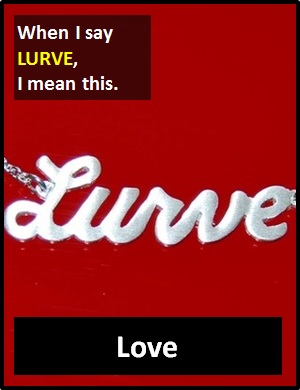 LURVE is a humorous way of saying "Love."

An Academic Look at LURVE

LURVE is typically used as a verb (i.e. a doing word). For example:

Example of LURVE Used in a Text

LURVE
Help Us To Improve Cyber Definitions
Please tell us using this form.