What Does LG Mean?

The term LG is used for girls (typically under the age of 14) who dress like older teenagers to enhance their image and popularity. For example, LGs will often wear clothing designed to be sexy, carry accessories that belie their years, and wear makeup. LGs are also sometimes known as JB (Jail Bait).

The term LG can also be used to refer to adult women who dress as young girls to attract partners who might find this sexy. Wearing the classic schoolgirl outfit would be an example of an adult dressing as an LG.

In the 1980s, the abbreviation LG stood for Lucky-Goldstar. The name Lucky-Goldstar comes from an amalgamation of the South Korean plastics company "Lak Hui" (pronounced Lucky) and GoldStar Co. Ltd, which was established by Lak Hui in 1958. Lucky Goldstar was renamed to LG in 1995. It is often thought that LG stands for "Life's Good," but this is the company's advertising tagline rather than an expansion of its name.

"Lucky-Goldstar" (not "Life's Good") is another definition for LG:

When I write LG, I mean this: 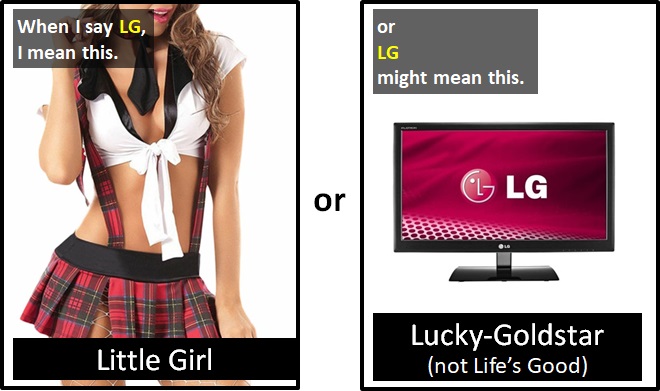 LG can mean "Little Girl" or "Lucky-Goldstar." It does not mean "Life's Good."

Examples of LG in Sentences

Here are examples of LG being used in conversations:

Example of LG Used in a Text

LG
Help Us To Improve Cyber Definitions
Please tell us using this form.