What Does LDE Mean?

Just as with BDE, LDE has nothing to do with physical endowment. Whereas BDE is used to refer to someone who possesses understated confidence, LDE is used to refer to people (male or female) who are the exact opposite. A person with LDE may be arrogant, petty, loud or otherwise obnoxious.

When I write LDE, I mean this: 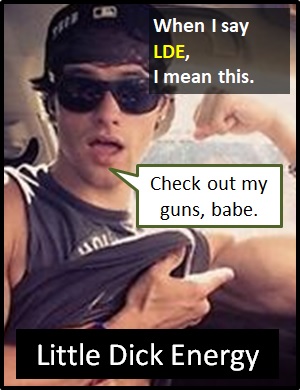 LDE is used to refer to people who are arrogant, petty or loud.

Examples of LDE in Sentences

Here are examples of LDE being used in conversations:

An Academic Look at LDE

As it is pronounced using its individual letters (i.e., "Ell Dee Eee"), LDE is classified as an initialism abbreviation. Initialisms are different to acronyms, which are spoken like words.

Example of LDE Used in a Text

LDE
Help Us To Improve Cyber Definitions
Please tell us using this form.