What Does KAREN Mean?

The name KAREN is used as a "Pejorative Term for a White Woman."

The name KAREN is used online as a pejorative slang term. It is used in many viral memes to describe angry, entitled, selfish and (often) racist white women, who use their apparent privilege to get their own way or to police other people's behavior.

In memes, KARENs are usually depicted as having a blond bob haircut, being an anti-vaxxer and (since the start of the coronavirus pandemic in 2020) objecting to the wearing of face masks. KARENs are typically ignorant of both their privilege and their prejudice.

The origins of the KAREN meme are uncertain. It has spread rapidly since 2017, but is widely believed to have been inspired by a Dane Cook comedy sketch that aired in 2005. The name Karen is considered a generic-sounding name for a middle-aged white woman. (According to Social Security data, Karen was the fourth most popular name for newborn girls in the 1960s. It peaked at number three in 1965.)

Although KAREN began as a meme used to describe white women engaging in what was perceived as racist behavior, it has now also evolved into a misogynistic term, employed by some white men and boys to attack and belittle women in general.

In July 2020, the issue of people making bogus racially biased calls to the police became of such concern that San Francisco state Supervisor Shamann Walton introduced the CAREN Act (Caution Against Racially Exploitative Non-Emergencies Act). The ordinance would amend San Francisco Police Code to make it unlawful for anyone to fabricate false racially-biased emergency reports.

As at September 2020, there is no universally accepted term for white males who act in the same way as KARENs. Names such as Chad, Kyle and Ken have not gained the same traction as their female counterpart. In fact, white males who act like KARENs are often just referred to as "Male KARENs."

Here's a light-hearted look at the KAREN phenomena, from Smosh:

Other female names that have also featured negatively in viral memes include Becky and Stacy.

When I write KAREN, I mean this: 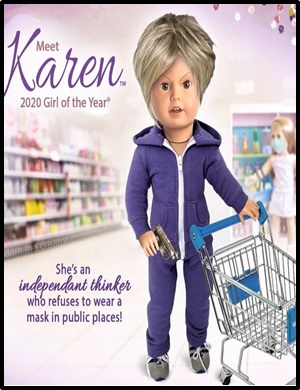 KAREN is a pejorative term for white women.

Examples of KAREN in Sentences

Here's an example of KAREN being used in conversation:

An Academic Look at KAREN

KAREN is a female name used as a slang term. Slang refers to words, phrases and uses of language that are regarded as very informal and which are often restricted to a special context or a particular group of users.

Example of KAREN Used in a Text

KAREN
Help Us To Improve Cyber Definitions
Please tell us using this form.

john doe (a name for any person (the us version of fred bloggs or a n other)) sn (screen name) tag (character name, signature, link to a person, children's game) twain (technology without an interesting name) wyn (what's your name?)