What Does INB4 Mean?

INB4 (In Before) can be used "to steal someone's thunder" (i.e., grab the glory for yourself) or "to beat someone to the punch" (i.e., head off an expected retort). In summary, it means to get a response in quickly before someone else does.

When I write INB4, I mean this: 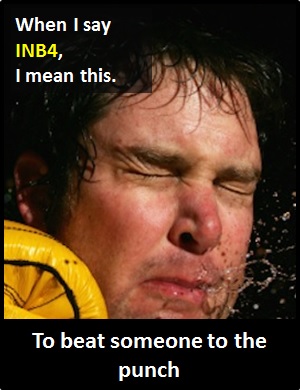 INB4 means getting in first.

Examples of INB4 in Sentences

Here are examples of INB4 being used in sentences:

(Here, Person C is grabbing the glory for himself.)

(Here, Person B is heading off an expected retort.)

An Academic Look at INB4

INB4 is typically used like an adverb of time meaning "Before you say anything."

Adverbs typically modify verbs. When INB4 is used, the verb is inferred. In full, a message starting with INB4 would read I am saying x, before you say anything. In Cyber Speak, this manifests itself as:

Before the digital era, we might have written something like "Spoiler alert" or "Yes, I know what you're going say" instead of INB4.

Example of INB4 Used in a Text

INB4
Help Us To Improve Cyber Definitions
Please tell us using this form.