What Does FSBO Mean?

FSBO means "For Sale By Owner." The abbreviation FSBO is usually seen when properties are advertised for sale privately and indicates that the owner of a property is offering it for direct sale without the use of an agent or broker. FSBO indicates that the seller wants to avoid paying a hefty commission for someone else to negotiate a deal and implies that the price will, therfore, be better for the buyer.

This way of buying or selling a home is still relatively uncommon in the UK, but is popular in both the USA and Canada.

When I write FSBO, I mean this: 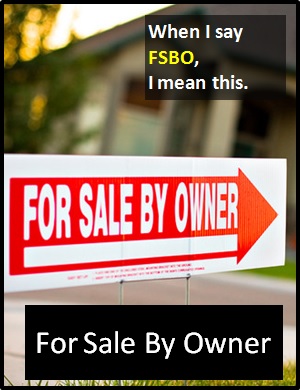 FSBO means For Sale By Owner.

Examples of FSBO in Sentences

Here are examples of FSBO being used in conversations:

An Academic Look at FSBO

As it is pronounced using its individual letters (i.e., "Eff Ess Bee Oh"), FSBO is classified as an initialism abbreviation. Initialisms are different to acronyms, which are spoken like words

Example of FSBO Used in a Text