FLBP (Future Lower Back Problems) is most commonly used to describe a female with large breasts, particularly a short female. For example:

(This is a euphemism for she has large breasts.)

Although far less common, the term is also used to describe someone performing heavy lifting or an exercise at the gym without any consideration for their own safety.

When I write FLBP, I mean this: 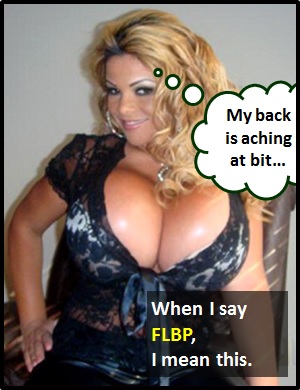 Having FLBP is a euphemism for having large breasts.

Examples of FLBP in Sentences

Here are examples of FLBP being used in conversations:

An Academic Look at FLBP

FLBP is typically used as a noun (i.e., a naming word). For example:

(Here, FLBP is being used as a noun.)

However, on occasion, it is also used as an adjective (i.e., a describing word). For example:

(Here, FLBP is an adjective.)

When FLBP is expanded, it is a noun phrase based on the common noun Problems. Even though Problems is a plural word, FLBP is hardly ever written FLPBs.

Before the digital era, we might have said something like "a large-breasted lady" instead of a girl with FLBP.

Example of FLBP Used in a Text

FLBP
Help Us To Improve Cyber Definitions
Please tell us using this form.