What Does FEMINAZI Mean?

The word FEMINAZI is used as a pejorative term to describe any woman with feminist views. It was popularised by radio talk-show host Rush Limbaugh, who credits Thomas Hazlett, professor of economics at the University of California at Davis, with coining the term. According to Limbaugh, FEMINAZI refers to militant feminists. However, the term is typically used to attack any woman expressing feminist views and the feminist movement as a whole.

By amalgamating the words "Feminist" and "NAZI," FEMINAZI seeks to equate the activities of feminists with those of the German Third Reich, thereby demonizing the feminist movement and stifling debate.

When I write FEMINAZI, I mean this: 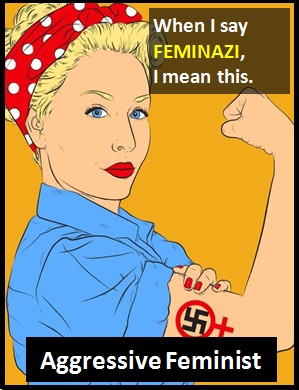 FEMINAZI is a pejorative term for feminists.

Examples of FEMINAZI in Sentences

Here are examples of FEMINAZI being used in conversations:

An Academic Look at FEMINAZI

As it is formed by merging two words into one, FEMINAZI is classified as a portmanteau word. It is formed by amalgamating the words feminist and NAZI.

The term "FEMINAZI" is used as a pejorative; i.e., a word or phrase that has negative connotations or is intended to disparage or belittle.

Example of FEMINAZI Used in a Text

FEMINAZI
Help Us To Improve Cyber Definitions
Please tell us using this form.