What Does FEELS Mean?

FEELS means "Feelings." The term describes the intense feelings you get when something is emotionally moving. The term is typically (but not exclusively) used to describe strong sad feelings.

In millennial-internet parlance, you could say that a song or a movie "gives you all the feels." FEELS may also be used in the singular. "The death of my favourite character gave me a feel."

FEELS was popularized by the Internet slang expression "I know that feel, bro." On social media, the term is usually accompanied by the "Feels Man" meme.

When I write FEELS, I mean this: 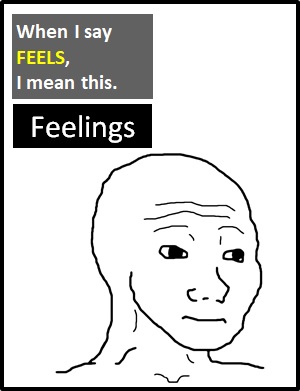 [The term FEELS is quite often accompanied by the "Feels Man" meme.]

Examples of FEELS in Sentences

Here are examples of FEELS being used in conversations:

An Academic Look at FEELS

FEELS is typically used as a noun (i.e., a naming word). For example:

(Here, FEELS is being used as a noun.)

FEELS is a shortned form of "feelings so it is a contraction. Contractions can also be formed by replacing a letter(s) with an apostrophe (e.g., can't).

Example of FEELS Used in a Text

FEELS
Help Us To Improve Cyber Definitions
Please tell us using this form.