What Does FAF Mean?

The abbreviation FAF is used with a number of meanings, including "Fit As F*ck," "Funny As F*ck" and "Fine As F*ck." Here is more information about each of these definitions of FAF. Examples of use can be found below

(Here, FAF indicates that the subject is extremely physically attractive.)

(Here, FAF indicates that the subject is extremely physically fit.)

FAF is also used with the meaning "Funny As F*ck." In this context, FAF indicates that something or someone is very amusing.

Less commonly, FAF is sometimes used with the meaning "Fine As F*ck." In this case, FAF expresses admiration for a person or object.

"Funny As F*ck" is another common definition for FAF.

"Fine As F*ck" is another definition for FAF.

When I write FAF, I mean this: 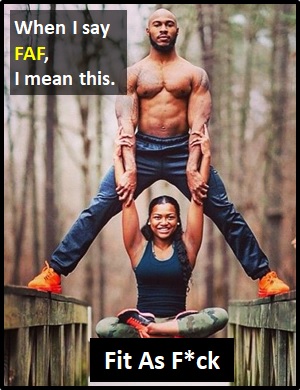 Examples of FAF in Sentences

Here are some more examples of FAF being used in conversations:

An Academic Look at FAF

Whether used with the meaning "Fit As F*ck," "Funny As F*ck" or "Fine As F*ck," FAF is simile, i.e., a figure of speech that likens one thing to another. However, as this likening is pretty meaningless (after all, what is "F*ck"?) it is probably best to think of FAF as an adverb that modifies an adjective to strengthen it, much like the word very.

FAF is classified as an initialism abbreviation, because it is pronounced using its individual letters (i.e., "Eff Ay Eff"). Initialisms are different to acronyms, which are spoken like words.

Before the digital era, we would have just said "Fit As F*ck," "Funny As F*ck" or "Fine As F*ck" instead of using the abbreviation FAF.

Example of FAF Used in a Text

FAF
Help Us To Improve Cyber Definitions
Please tell us using this form.