What Does ESTD Mean?

ESTD means "Easier Said Than Done." The abbreviation ESTD refers to something that might be a good idea in theory and is easy to talk about, but would be much harder to put into practice (e.g., rowing the channel or running a four-minute mile).

When I write ESTD, I mean this: 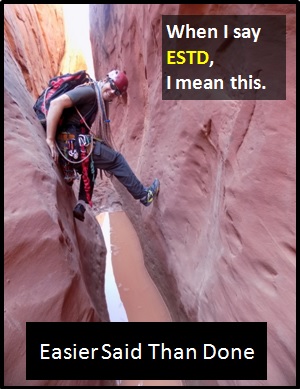 ESTD means something is easy to talk about, but harder to do.

Examples of ESTD in Sentences

Here are examples of ESTD being used in conversations:

An Academic Look at ESTD

In this instance, the use of "easier" as an adverb, whilst common, is seen as archaic. A more grammatically acceptable version would be "It is more easily said than done."

The saying "Easier said than done" should not be used in formal writing.

Example of ESTD Used in a Text

ESTD
Help Us To Improve Cyber Definitions
Please tell us using this form.