What Does ERP Mean?

Writer A [responsible for Jill]: As Jill entered the room, she removed her bobble hat and brushed the snowflakes to the floor. She removed the woollen scarf that Jack had lent her and handed it to him. Her confident face masked the wave of exited fear that suddenly washed over her. Despite being dressed in a full-length leather coat and knee-high leather boots, she felt naked. She knew her coat was the only barrier to her intended pass at Jack, and she knew she couldn't start her piano lesson dressed in full leather.

Writer B [responsible for Jack]: Jack instantly noticed the absence of any top under Jill's coat and caught a glimpse of the top edge of Jill's bright red bra. Unsure how to respond, he didn't ask to take her coat. He quickly turned and walked to the piano.

Writer A [responsible for Jill]: Jill had read his face. She didn't move. She would wait for him to turn around again, and then she would slowly unbutton her coat to reveal her brand new, bright red skimpy two-piece, and her intentions for the next hour.

When I write ERP, I mean this: 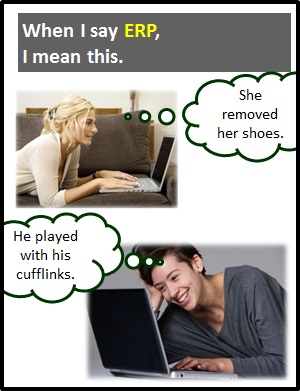 On the internet, ERP usually relates to a game of "story tennis" between two writers.

Examples of ERP in Sentences

Here is an example of ERP being used in a sentence:

An Academic Look at ERP

ERP is typically used as a noun (i.e., a naming word). For example:

ERP is an initialism abbreviation. This means it is pronounced using its individual letters (i.e., Ee Ar Pee). (Initialisms contrast with acronyms, which are spoken like words.)

Example of ERP Used in a Text

ERP
Help Us To Improve Cyber Definitions
Please tell us using this form.