What Does EMO Mean?

EMO means "Emocore (a music genre)," "a young person who dresses like a Goth and listens to Emocore," or "Emotional."

The term EMO is a contraction of "Emocore," which itself is a contraction of the words "Emotional" and "Hardcore." EMO music was originally a genre of rock, characterized by an emphasis on emotional, often confessional, lyrics. EMO songs usually have a more sensitive and personal side to them than in most other genres of music.

EMO music emerged in Washington DC during the mid-1980s, as a style of post-hardcore punk rock. It was pioneered by bands such as Rites of Spring and Embrace, before being adopted and reinvented by alternative rock, indie rock and pop punk bands. During the early and mid-1990s, a number of independent record labels began to specialize in EMO music. By the early 2000s, major record labels had got involved and EMO music became widely popular, with bands such as Jimmy Eat World, Fall Out Boy, My Chemical Romance and Panic! At the Disco becoming established performers with enduring appeal to a wide fan base.

EMO is now more generally used to refer to a person (typically a teenager) who dresses in a Gothic style and listens to EMO music.

Top 10 Songs We All Listened to in Our Emo Phase

EMO is also used as a straightforward contraction of the word "emotional."

Here's a short video explaining how to use this entry on EMO.

When I write EMO, I mean this: 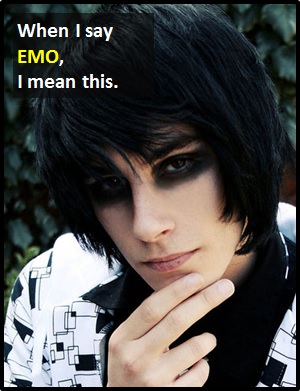 Like Goths, many EMOs strive for that "just-got-out-the-coffin" look.

Examples of EMO in Sentences

Here are examples of EMO being used in conversations:

An Academic Look at EMO

The word EMO can be used as a noun or an adjective. For example:

Before the digital era, we might have said something like "A sad Goth" or "A depressed Siouxsie & the Banshees fan" instead of using EMO.

Example of EMO Used in a Text

EMO
Help Us To Improve Cyber Definitions
Please tell us using this form.