What Does BMW Mean?

The abbreviation BMW is used with the meaning "Big Mexican Woman" to describe a woman of Latina origin who has a large figure. It is an empowering and politically-correct term for women of South-American origin who might previously have been described as "fat." In this context, BMW is typically used as a description on dating sites or as an indexing tag on pornographic websites.

BMW also stands for "Bavarian Motor Works" ("Bayerische Motoren Werke" in German), which is a car and motorcycle manufacturer with its headquarters in Munich, Germany.

BMW means "Big Mexican Woman." This is the most common meaning for BMW on online dating sites, such as Craigslist, Tinder, Zoosk and Match.com, as well as in texts and on chat forums.

When I write BMW, I mean this: 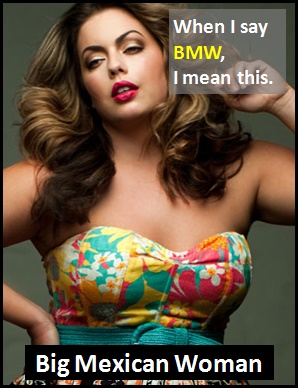 Examples of BMW in Sentences

Here are examples of BMW being used in conversations:

An Academic Look at BMW

Whether used with the meaning "Big Mexican Woman" or "Bavarian Motor Works," BMW is classified as an initialism abbreviation, as it is pronounced using its individual letters (i.e., "Bee Emm Dblyoo"). Initialisms are different to acronyms, which are spoken like words.

BMW cars have always been known as BMWs but, before the digital era, we would probably have just said something like "Big South-American Woman" instead of using the abbreviation BMW with the meaning "Big Mexican Woman" .

Example of BMW Used in a Text

Using BMW on a Cell Phone (Texting, Whatsapp, and Tinder)

BMW
Help Us To Improve Cyber Definitions
Please tell us using this form.