What Does 4CHAN Mean?

4CHAN is an "Image-Based Bulletin Board."

4CHAN is a popular image-based bulletin board (imageboard), with a highly dedicated community of users. It was launched in 2003, and claims to have over 22 million monthly visitors. The 4CHAN site hosts boards dedicated to a wide variety of topics, including Video Games, Anime, Television, Film, Comics, Technology, Fitness and Cars (amongst many others). No registration is required (or possible) on 4CHAN, meaning that users can remain completely anonymous.

4CHAN was originally dedicated to posting images and discussions related to anime. However, it has since developed into a significant hub of Internet subculture, including activist and political movements, such as Anonymous and the alt-right, as well as conspiracy theories, such as QAnon.

When I write 4CHAN, I mean this: 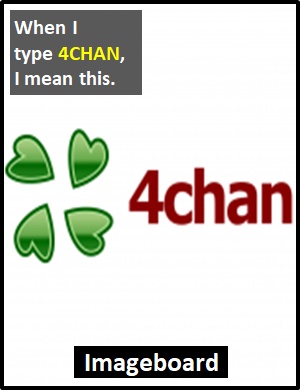 4CHAN is an "Image-Based Bulletin Board."

Examples of 4CHAN in Sentences

Here's an example of 4CHAN being used in conversation:

Example of 4CHAN Used in a Text

4CHAN
Help Us To Improve Cyber Definitions
Please tell us using this form.